An index point above 50 indicates expansion in the South African agribusiness activity. Therefore a 60 index point suggests that agribusinesses are holding an optimistic view regarding business conditions in the country. 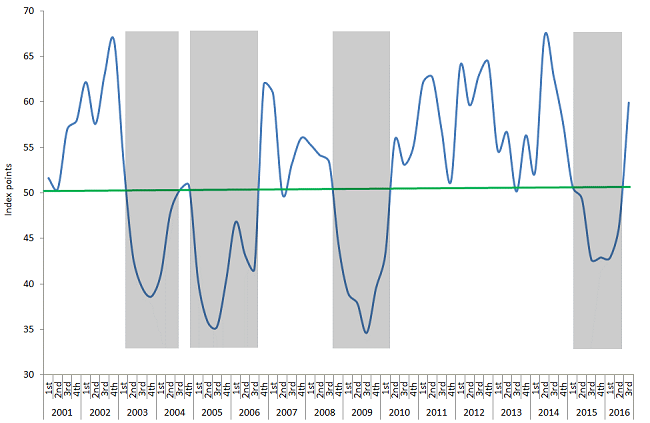 These results offer some hope about the sector’s activity. However, it is important to highlight that the recovery was not supported by broad improvement in all sub-indices. Seven out of ten sub-indices of the survey showed contraction, with the exception of economic growth prospects, agricultural conditions and employment sub-indices, which were the key drivers of this rebound. Also worth noting is that the respondents completed the questionnaire after the release of the second quarter GDP figures, which to some extent, might have influenced their view regarding the country’s economic growth prospects. The optimism about agricultural conditions is largely supported by the expected LaNiña occurrence, as well as favourable winter crop conditions in the Western Cape province.

Discussion of the sub-indices
Confidence regarding the turnover sub-index dropped by 4 points to 75 in the third quarter from the previous one, which suggests some agribusinesses are making losses, particularly the ones operating in grain producing areas. Lower production means lower storage and handling income for agribusiness.

In line with the turnover sub-index, confidence about the net operating income sub-index dropped by 10 index points to 65 from the second quarter, as agribusinesses continue to suffer the effects of the 2015/16 drought season. Moreover, the market share of the business sub-index was down by 7 index points from the previous quarter to 68, reflective of the sentiment expressed in the aforementioned sub-indices.

The perceptions regarding employment in the agribusiness sector marginally improved in the third quarter of 2016 by 9 index points from the previous quarter to 63. This recovery is partly linked to the fact that the sector is approaching the production season, therefore activity might increase, which in turn could lead to seasonal job opportunities.

Confidence regarding capital investment dropped by 7 index points to 60 from the second quarter. We suspect that this decrease is linked to growing concerns about South Africa’s political and policy uncertainty.

As expected, confidence in export volumes dropped by 17 index points from the second quarter to 33, which is the lowest level since Q1, 2006. Thisislargely due to lower crop production. Summer crop production is set to reach 8.93 million tons, down by 25% from last season, which was already 28% lower than in the 2014 season.

Surprisingly, confidence regarding South Africa’s economic growth rebounded by 26 index points to 30 from the second quarter of 2016. We believe that this improvement was influenced by the recovery in South Africa’s real GDP figures. The GDP figures showed that the economy grew by a seasonally adjusted, annualised rate of 3.3% quarter-on-quarter (q/q), following a contraction of 1.2% q/q in the
first quarter of the year. Therefore, we remain cautious that the respondents’ views could easily change in the coming quarter.

South African agribusinesses’ confidence around general agricultural conditionsimproved by 33 index points to 55 from the previous quarter. This is largely supported by the expected weak La-Niña occurrence, which could potentially lead to normal or above normal rainfall that might replenish soil moisture and benefit the agricultural and agribusiness sector. Moreover, winter crops are in good condition throughout the country, and this has contributed to the improved sentiment regarding agricultural conditions. In fact, South Africa’s 2016 wheat production is estimated at 1.7 million tons, up by 17% year-on-year.

Confidence concerning the debtor provision for bad debt sub-index declined by 43 points to 32, following the 2015/16 drought season. However, higher commodities prices have, to some extent, compensated for lower production volumes in some areas. Thus, improving the farmers’ ability to meet their obligations.

Additionally, confidence regarding financing costs sub-index dropped by 61 points to 31. This could be linked to the growing sentiment that interest rates could be lifted again before the end of the year, which will then increase agriculture’s financing costs.

The improvement in the third quarter Agbiz/IDC Agribusiness Confidence Index is encouraging. However, we are cautious not to draw conclusions about the outlook of the sector from this single reading, as this improvement was only in three of the ten sub-indices surveyed.

Looking ahead, we are not confident that the economic growth activity will continue to show improvement in the next quarter. Meanwhile, agricultural conditions could improve in the coming months. It is important to note that the prospects of La-Niña occurrence have been revised down to 50% from the previous estimate of 65% by the Australian Bureau of Meteorology. This suggests that the country could experience a weak La-Niña towards late spring through the summer season of 2016/17 production year. Such weather event could lead normal to above normal rainfall, which might then replenish soil moisture.

Overall, policy uncertainty remains a key stumbling block and could potentially discourage investments in the agricultural sector over the foreseeable future.