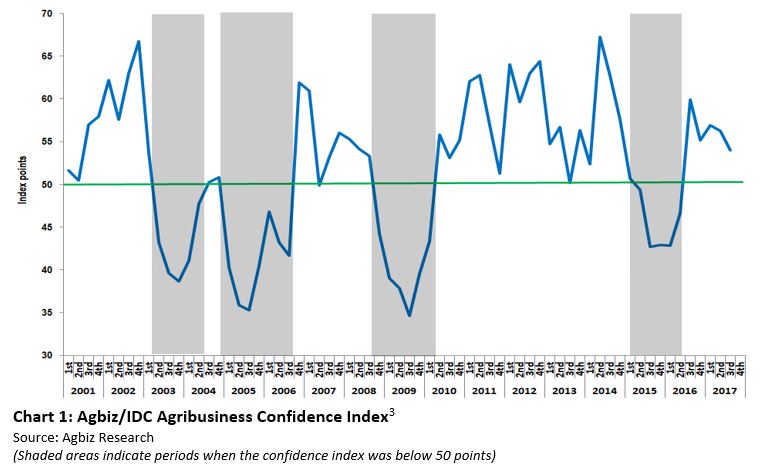 Amongst the ten sub-indices making up the Agbiz/IDC Agribusiness Confidence Index, the quarterly decline was broad based, with the exception of turnover and capital investment. Although there are a number of factors driving sentiment of the other sub-indices, the unfavourable weather conditions in the Western Cape province and relatively lower global demand for maize exports were the key drivers of the decline in sentiment in the third quarter of this year. In the section below, we explore the sub-indices weighing on agribusinesses' confidence.

Discussion of the sub-indices

Confidence regarding net operating income sub-index declined further by 5 index points to 63 in the third quarter of this year. In part, this shows an expectation of lower profitability relative to the previous quarters, particularly for agribusinesses operating in the horticulture and wine industries.

The perception regarding export volumes sub-index deteriorated by 8 index points in the third quarter to 50, which is the lowest levels since the third quarter of 2016 – a drought year. As mentioned above, this is largely due to lower demand for maize in South Africa’s traditional export markets, as well as lingering concerns of dryness in some horticultural producing regions. In a similar trend with the export volume sub-index, confidence in the market share of the business sub-index declined by 12 index points to 57 points in the third quarter.

Confidence regarding employment in the agricultural sector remained unchanged from the previous quarter, at 59 index points. Although this is an encouraging print, the weather remains a key deciding factor regarding the outlook of South Africa’s agricultural jobs market.

The perception regarding economic conditions declined further by 9 points in the third quarter of this year from the previous quarter to 40. This reflects relatively downbeat expectations for overall economic growth performance this year.

After seeing good summer rainfall in 2017 which led to record maize and soybean harvest, confidence regarding general agricultural conditions sub-index declined by 17 index points in the third quarter of this year to 48. This is largely underpinned by unfavourable dry weather conditions in the Western Cape province - which is a key producer of winter grains, horticulture products and wine.

The agribusiness survey suggests that the provision for bad debt might have increased in the third quarter of 2017, in line with unfavourable weather conditions in winter grains producing regions. The debtor provision for bad debt sub-index increased by 5 index point to 43.
Notwithstanding the recent interest rate cut, the financing costs sub-index was up by 17 index points in the third quarter of this year to 50. To some extent, this is due to expectations of higher costs of servicing debt in anticipation of more credit rating downgrades.

Despite the decline in the Agbiz/IDC Agribusiness Confidence Index in third-quarter, the print is still in expansionary territory. “With that said, a number of agribusinesses are concerned about persistent dryness in the Western Cape and Eastern Cape provinces, and the effect on crops and business,” says Wandile Sihlobo, Agricultural Economist at Agbiz.

[1] The results from surveys such as the BER’s Business Confidence and Consumer Confidence still reflect some negative sentiment showing business and consumer confidence still under pressure in the first two quarters of the year.
[2] A reading above 50 indicates expansion in the South African agribusiness activity.
[3] The Agbiz/IDC Agribusiness Confidence Index reflects the perceptions of at least 20 agribusiness decision-makers on the ten most important aspects influencing a business in the agricultural sector (i.e. turnover, net operating income, market share, employment, capital investment, export volumes, economic growth, general agricultural conditions, debtor provision for bad debt and financing cost). It is used by agribusiness executives, policy-makers and economists to understand the perceptions of the agribusinesses sector, and also serves as a leading indicator of the value of the agricultural output while providing a basis for agribusinesses to support their business decisions.