The African continental market is projected to have 1.36 billion people with income levels rising to 6 300 US$ per capita by year 2022 (PPP based - IMF, 2017) - Sifiso Ntombela, Agbiz Head: Trade and Investment Intelligence

The African continental market is projected to have 1.36 billion people with income levels rising to 6 300 US$ per capita by year 2022 (PPP based - IMF, 2017). About 70% of these Africans will be younger than 30 years of age, presenting a great opportunity for high value food exports into the continent. Noticing this potential in 2012, the African Head of States agreed to negotiate and conclude a Continental Free Tarde Agreement (CFTA) by 2017 in order to improve mobility of business people and increase intra-African trade to 25% by 2022.

CFTA is a key initiative aiming to urgently create a common market for goods and services in Africa and is in line with the Abuja Treaty to establish an African Economic Community. CFTA’s objectives include enhancing industry competitiveness; resolving the challenge of multiple and overlapping memberships; creating a freer market and increasing intra-African trade. Presently, intra-African trade is very limited and constrained by high tariffs and non-tariff barriers.

The CFTA is seen as a strategic tool that will deepen regional and continental intra-trade, subsequently boost business and economic integration of 55 African states under a pan-African free trade area. However, it is imperative to note that it’s not only tariffs that inhibit intra-African trade, but also trade related infrastructure. Trade facilitation measures, such as simplification of customs, are also fundamental to boosting African’s internal trade.

It is evident that the success of the CFTA will depend on the continent’s ability to address the overlapping membership issue as most African states are members of more than one Regional Economic Community (REC). In addition, there is a need to synergize the different priorities of REC’s, as well as consider the economic capacity issue as different African states are at different levels of development.

Looking at the bilateral trade between South Africa and rest of the continent, the country’s exports have more than doubled in value over the past six years. In 2016, the South Africa’s exports to the continental market amounted to R317 billion, making it the second biggest after the Asian market (see Chart 1). South Africa’s exports are still concentrated to SACU countries, suggesting that large untapped opportunities in the rest of the continent are still waiting for South African products and services. Of the R317 billion worth of exports, agricultural products contributed around R57.7 billion (equivalent to 18.2% share) in exports, driven by a continued demand for beverages, cereals, fruits and prepared foods.

The increasing population and income levels in the African continent should not only signal a growing market for South African products but it also presents an opportunity for businesses to co-operate with other African entrepreneurs to ensure Africa prospers economically. The CFTA is one of the key initiatives that promotes co-operation in order to achieve the Agenda 2063 of the African Union. To date, significant progress has been made in establishing the CFTA. 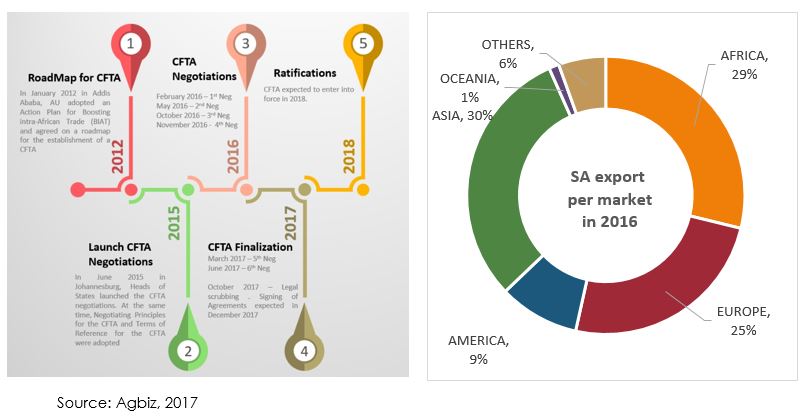